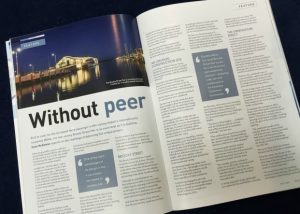 GeoExchange Australia is pleased to share an exciting project that we have been involved in – the Brooke Street Pier in Hobart, Tasmania. With a Special Feature in the latest AIRAH EcoLibrium Journal, the four-storey Brooke Street Pier is a unique innovation that acts as both a boat and building.

Rather than build a traditional concrete-piled wharf for the four-storey structure, it was discovered that it would be more economical to build a floating pontoon, becoming the first building of its kind in Australia.

With sustainability being an important factor for the project, it was identified that the harbour be used as both heat source and heat sink.

The geoexchange system uses the harbour water to provide high efficiency heating and cooling without the ugly mess of cooling towers and other air sourced equipment.

It comprises of “sea water being drawn from below the hull through one side of a titanium heat exchanger. The other side is a freshwater loop that is pumped to four heat-pump chillers within the terminal’s partially submerged plant room. Heating and chilled water is then distributed throughout the building to the distributed fan-coil units (FCUs) and air-handling units (AHUs), which condition the different functional spaces within the terminal.” EcoLibrium, July 2015.

Acting as the geothermal consultant, Geoexchange Australia’s Managing Director Yale Carden advised that “the cold-water environment of the Derwent River necessitated the use of an extended-range ground source heat pump (GSHP), rather than a standard water-source heat pump operating in heating mode.”

The plant has an overall heating and cooling capacity of 440 kW, which is serviced by four WaterFurnace NKW130 ‘reversible chiller’ ground source heat pumps, supplied by Geoexchange Australia.

Commissioned in February 2015, with ferry services commencing around the same time, this unique building and boat illustrates the diversity of geoexchange applications and the ability of ground source heat pumps in efficiently extracting heat from water that is too cold for conventional water source heat pumps.

For the full article and to learn more about Brooke Street Pier, download at EcoLibrium magazine:

Geoexchange: The Most Environmentally-friendly HVAC Solution »
« GeoExchange Australia at Future of HVAC 2015
Subscribe to our Newsletter